Means to an End
Do you remember the first time you encountered a windmill? In general, one thinks of scenic car drives--of the stifling heat of the vehicle in which, perhaps in the summertime, the gilded hazy summertime of youth, you bear witness to the monolith-cum-behemoth. The pulverisation of the landscape or seascape from which the windmill arises happens instantly. This act of distortion, however sudden, is paradoxically the result of perpetual motion; the windmill cannot help itself; it must turn ceaselessly. As you pass the windmill, it will continue its Sisyphean task.
The paintings that comprise Means to an End feature readily invoke three elements: the sea, the wind, and the windmill. They are captured from various angles, giving ample room to gaze, study, and contemplate them. Paradoxically, however, the gesture which offers these works for us is the antithesis of the elements it portrays. The movement in the scene is rendered motionless despite the breeze of the wind, the motion which is ingrained into the ontology of the sea, the wind and the windmill. In a sense, the pulverizing effect of the windmill upon the viewer is doubled upon itself, causing a rupture of meaning: to attempt ceasing the motion of the sea or wind is ludicrous. Somewhere in a faraway corner of the universe, the corpse of Elon Musk turns its head and gives a wry smile.
In Saaristo’s work, a figure emerges reminiscent of J. L. Borges’ Pierre Menard, underlined by the motif of the windmill. One can guess at what lies behind the title of Means to an End: Is painting a medium which exposes the world to us? Hardly. Is the petit bourgeoisie concern of ruined landscapes or the populist hyperbole of exploding bats justifiable? It is not. In an Adornonian scheme, painting can take as its own that which the world has deemed as ugly and within this ugliness deny the very world which upholds this ugliness. What the painting reveals is always in a state of becoming, a promise of truth to unfold.
The text was written by Jaakko Rintala and Edited by Alexa Van Abbema.
Graphic design by Risto Kujanpää.
The exhibition is supported by the Arts Promotional Center Finland. 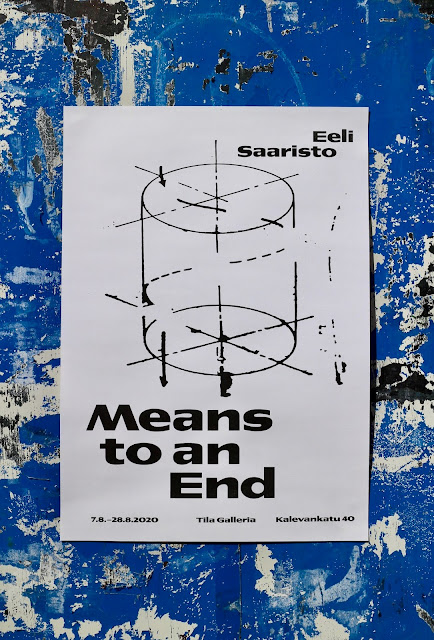